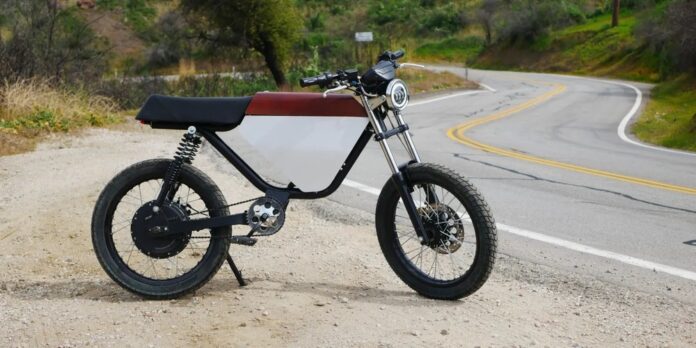 The ONYX is a beast of a 60 mph electric bike, but it’s also a moped in the purest sense of the word. For over two years, I had been envious of this bicycle. Since the company’s crowdfunding campaign in the summer of 2018, I have chronicled the creation and release of the ONYX RCR. So far, though, I’ve been looking for an opportunity to mount one. The journey was memorable because the company’s CEO, James Khatiblou, drove me there in his ONYX RCR. Our twin tiny electric hell-raisers were in a raging frenzy all afternoon. But first, let’s look at the bike’s technical specs so we know what we’re dealing with before I go into the review.

The ONYX RCR: A Classical Reimagining

Old and new harmoniously coexist in the ONYX RCR. It has the retro look of a moped, but its electric powertrain is potent and cutting-edge. The ONYX RCR can propel you with incredible energy considering its compact size, with just a wrist flick. Power levels on the electric motorcycles I’ve ridden have ranged from 3 kilowatts to 80 kilowatts. Despite the RCR’s position towards the bottom of the range, the bike has the pulling power of a considerably bigger motorbike. A 200-amp controller is mentioned in the specifications. Unless they are lying about the voltage on that controller, 18 horsepower (14 kW) is the maximum power that can be drawn from the electrical system at 72 volts.

When individuals first test out an e-bike, they are excited to ride a completely silent, electrically powered motorcycle. I consider myself a bike rider; Every week I switch to a new device, and it’s been a while since I’ve had a genuine ear-to-ear e-grin. Resoundingly, the ONYX RCR has returned. With a vehicle that seemed a little bigger than a regular bicycle yet propelled me up to 59 mph, I felt a strange, childlike delight as I zoomed off at undoubtedly unsafe speeds. Even though I didn’t quite reach the advertised 60 mph, I went fast enough that I had no grounds for complaint. One of the best things about riding an electric moped is the surprising agility it provides, given its impressive power and low weight. The large size and long wheelbase make slicing up a canyon road a breeze. The sturdy steel frame and motorcycle-style 17-inch wheels contribute to this effect.

Can it be Made Better?

While riding the ONYX RCR is a lot of fun, it could be better. While the crew deserves praise for producing such a high-quality moped on their first try, there is certainly room for improvement in the design. Mounting the battery carrier in the standard “top tank” configuration raises the vehicle’s center of gravity. As an added annoyance, the battery cover is not the easiest to take off and replace each time; doing so usually requires some coaxing, light massage, and a pinch of luck. However, since most riders would keep the RCR in a garage, you probably will only have to take the battery out sometimes.

How Long Will a Hybrid Battery Last?